What's in a Name?

WHAT’S IN A NAME? 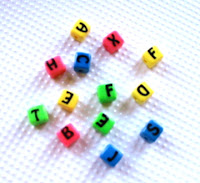 The girl spoke angrily to me. “Don’t change my name!”

Luckily it was only a dream. But when I woke up the next morning, I felt so badly. Maybe I shouldn't have changed that character's name after all.

It seemed so simple - just do a global. (Don’t forget to proofread. That new name will pop into other words by mistake. If you just change every Tom to a Ben, you’d get an aBenic bomb.)

But let's face it. Names are important. A rose called “yuck” would NOT smell as sweet. Names evoke in so many ways. Lots of consonants can sound harsh. Lots of vowels can be musical. The name can remind you of something -- like a hurricane. Or a kid who picked on you in high school. Or another character created by another author. Which was the reason I decided to make the change. I didn’t want my girl to be compared to the other one.

Sometimes people ask me where I find the names for my characters. There are so many things to consider that I postpone the decision as long as I can.

I usually write an entire first draft without names. In The Desperate Adventures of Zeno and Alya (my novel that’s coming out on October 15th), the names of the main characters started as the initials Z and A. Eventually the African gray parrot Zeno was named after a Greek philosopher because his “servant” (as Zeno prefers to think of his owner) was a professor of Greek literature. That choice inspired me in other ways. Zeno the man had lots of great quotes, like - “Two ears, one mouth!”  Which means, humans should listen more than they talk. So many of my favorite parts wouldn’t have been in the book at all if I had named Zeno something like Adam.

Switching names is very hard. Even when the characters don’t complain. However I did it. But first I rather superstitiously consulted my oracle. I offered Blackberry two pieces of food - having predetermined that one would be linked to the old name and the other to the new. She chose the new name. Two times in a row!

And so Lanora is now Lanora. Whether she likes it or not.

Posted by Jane Kelley at 1:52 PM No comments:

You recently wrote about someone who said he was a dog man. I think his name was James Thurber?

Obviously I don’t know this person. Anyone who knew me would not prefer dogs to cats.

I believe you also mentioned this person was a writer? He must have been a rare genius who could arrange words properly on the page the very first time. His ideas must have been so amazing that he deserved to have his dog look at him in this adoring fashion.

You, however, are not a genius. You feed me and your lap is warm-–at least warmer than the sofa. But you are not nearly as clever as I am. It’s only because you are mine that I bother to tell you the truth.

You're lucky to have a cat like me because you need to rewrite. Many times, in fact. You must dig deeper, delete those second rate sentiments, and above all never be satisfied with your first thought. Lucky for you, I'm here to tell you that whatever you've written today isn’t quite good enough. You can do better. If you ever forget that, my stare will remind you. 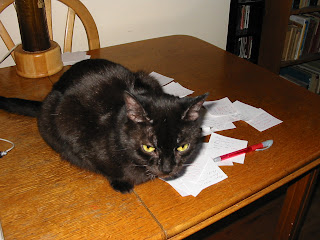 Go on. Get back to work. After you’ve given me my dinner.
Posted by Jane Kelley at 11:58 AM No comments: