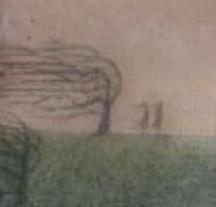 In just three days, my second novel The Girl Behind The Glass will be published by Random House.  A few days after that, my daughter’s play 22 Stories will have its opening night in the 2011 New York International Fringe Festival.  This is an exciting coincidence.  Especially since we have both written about twins.

Here are my twins.  This image is a section of my book’s cover (illustration by Jaime Zollars). 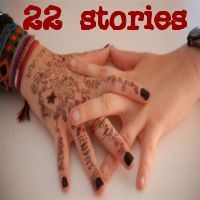 The hands in this photo (taken by Keith Weber) tell the story of my daughter’s play.  Her twins embody the conflict between wild creativity and discipline.  I know I have that struggle in me.  If I don’t get both sides to work together, I’ll never write a book.

My disciplined part likes to have a plan.  It decided my second novel would be about a girl who pretends a house is haunted and is shocked to discover it really is.  Then my wilder part whispered, let the girl be twins.  Naturally the wilder part didn’t say why.  Wilder parts don’t need reasons for what they do.

The disciplined part believed there was no justification.  Two sisters would just be a distraction from the scary fun stuff.  The howling wind, the bats in the attic, the glowing eyes.

Then my husband, who is often wiser than I am about what I’m writing, pointed out that twins are experts at wordless communication.  Since they understand each other so well, they might be able to understand whatever that haunting presence is desperately saying.

So many human sorrows stem from this.  Are you listening?  Are you there?

Disaster strikes my daughter’s twins when one sister fears that she has lost her connection with her sister.  Mine are led to a similar brink.

But in the end, they do listen.  They do understand.  And they are understood.
Posted by Jane Kelley at 3:20 PM No comments: