With Ghouls and Gourds at the Brooklyn Botanic Garden 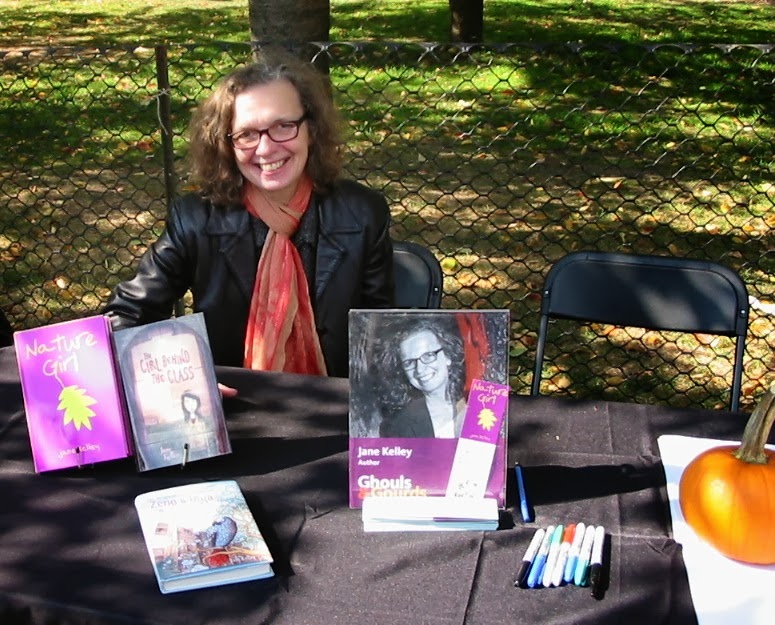 The writers were each given a table, a chair––and a pumpkin. 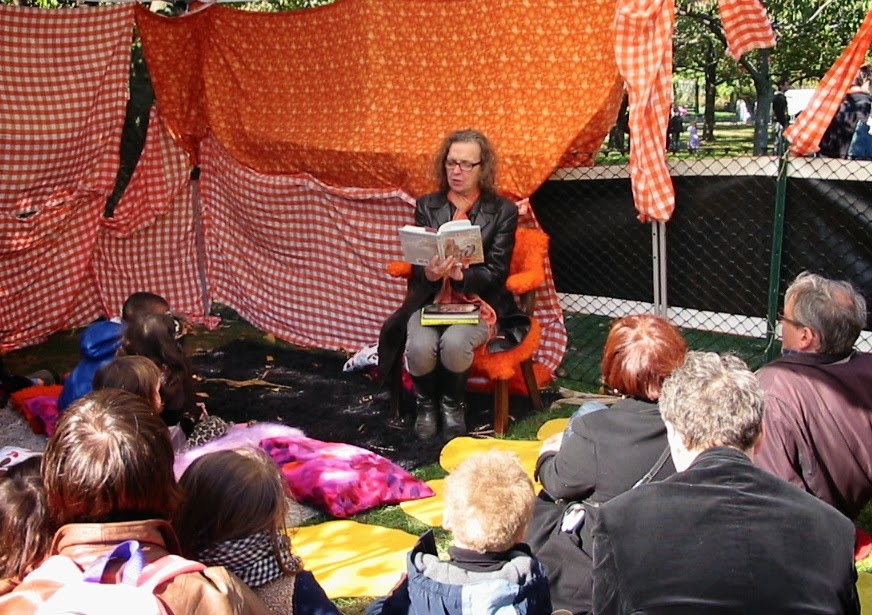 There was a special place where we read from our books.

But what I really love about these festivals is that I meet so many more kids than can fit inside a classroom or a bookstore. Talking with readers is always fun. (It's even more entertaining when they're super heroes, woodland creatures, Ninja girls and kitty cats.) They passed by my table and looked at my book. They read the jacket flap. They admired the cover.  Amazingly, their adult companions all wanted to buy their kids a book. After they did, from a temporary bookstore, the kids came back to ask, somewhat shyly, Would you sign? 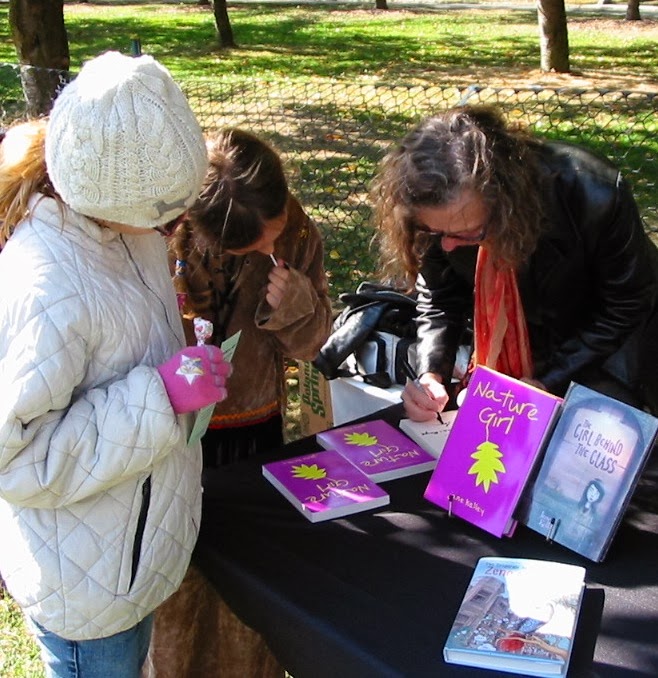 WOULD I SIGN?  Of course! The kids patiently spelled their names.  They probably wondered why I wrote so slowly, but I’m always a bit nervous that I’ll misspell a name and ruin someone’s book. Then I signed mine with the date.  Unfortunately there’s never enough time for me to write everything that I wish I could to these young readers. So I thought I would put that message here.

Dear Reader,
Thank you for joining my characters in this journey. I hope they take you someplace you never thought you’d go. I hope you find them to be good company. I hope they brought the kinds of snacks you like!  And thank you for being a reader of books – any books, not just mine. Because readers are wonderful people.
Posted by Jane Kelley at 11:12 AM 1 comment:

Kirby Larson invited me to do a guest post on her blog. She's the author of many books, including the Newbery Honor winner Hattie Big Sky and Hattie Ever After.  Hattie is an amazing and inspiring character. I encourage you all to get to know her. 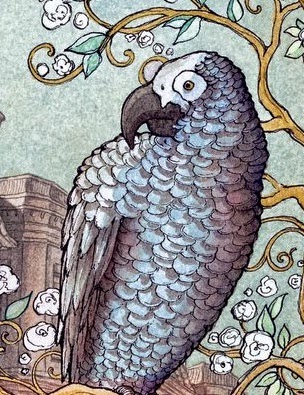 I was delighted to have the chance to explain how Zeno got his name. What started as a random choice turned out to be an important theme for the book.

To visit Kirby Larson's blog
Posted by Jane Kelley at 10:36 AM No comments:

The Desperate Adventures of Zeno & Alya will be in bookstores in less than two weeks, and hopefully in your hands soon after that. If you look at the cover, you’ll see that Eliza Wheeler drew a Brooklyn brownstone that could be on my street. 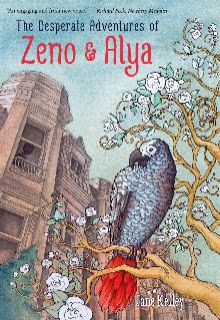 Certain parts of the book are straight from my imagination, but the setting is very specific to Park Slope, my neighborhood in Brooklyn. I thought it would be fun to share some pictures of the places and the birds that inspired me. 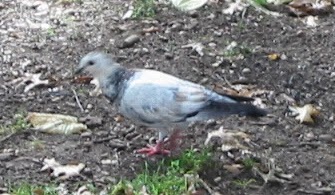 Pigeons are pretty much everywhere in New York City. Only a very few people like them. I took it as a tremendous compliment when my editor Liz Szabla told me that she’ll never think of pigeons the same way again after she read about Bunny, the noble pigeon who teaches Zeno the meaning of the word “home.”

Monk parrots are becoming more common too. Flocks have nested in many places all across the country, but mine have chosen to live in Green-Wood Cemetery, which is located about a mile from my apartment. 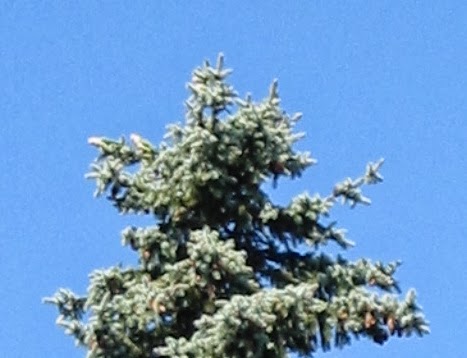 If you look closely, you can  see two green Monk parrots perched at the top of a pine tree. They were chattering away to their offspring who were safe inside the large nest that surrounds the tallest spire at the grand entrance to the cemetery. 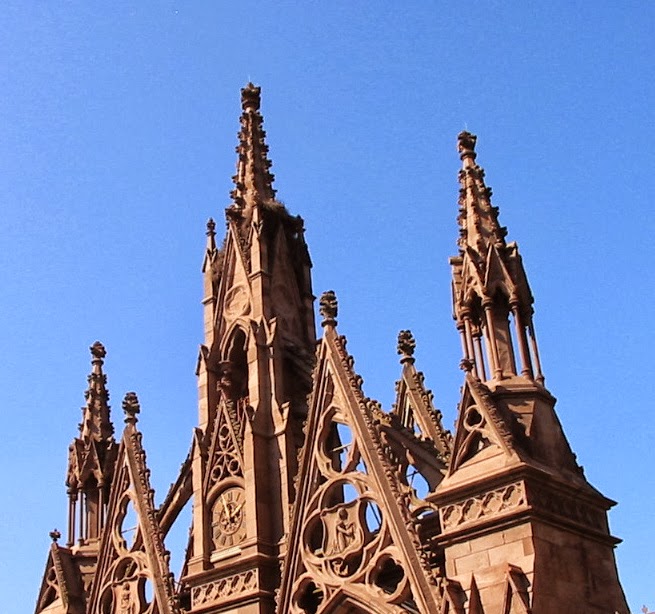 This is where Zeno hoped to reside. He thought it would be fitting for such a “booful, briyant” bird like him.

And here is where the Monk parrots forced him to take refuge––on top of this statue of an angel. The arrogant Zeno believes it is a “parrot man.” 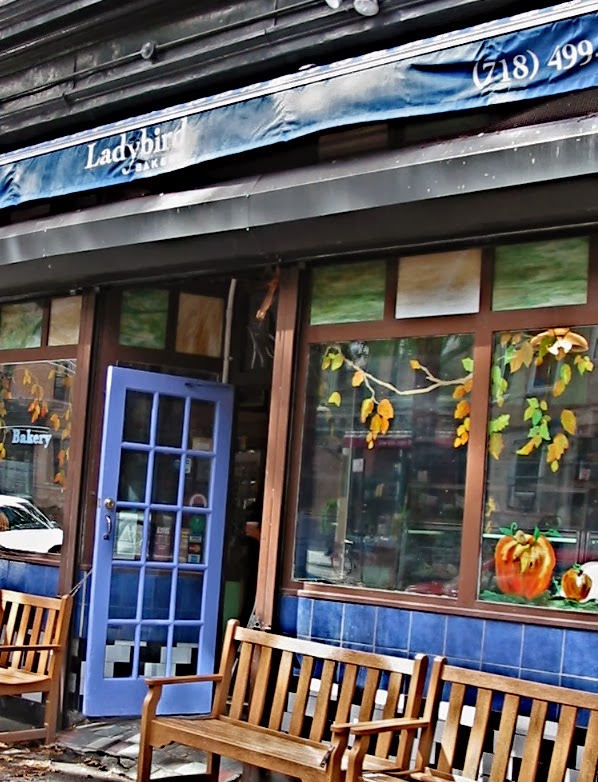 And here is the most important location of all. This bakery is the source of the banana nut muffins. A muffin is what first lures Zeno to Alya’s window. Over the course of the novel, the muffins become much more than a delicious treat. They are—like all the favorite foods we share with friends—a little piece of home.

Posted by Jane Kelley at 8:42 PM No comments: