The other day I came across a picture that my daughter drew ten years ago. She was just beginning to fall in love with the theater. I was so enchanted with her depiction of herself taking over the stage. 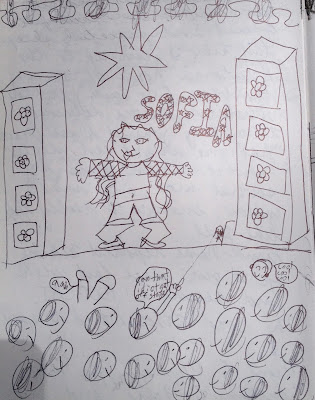 Until I looked closer. In the middle of the cheering crowd, there was one critic, shall we say, who chose to point a finger at the performer. 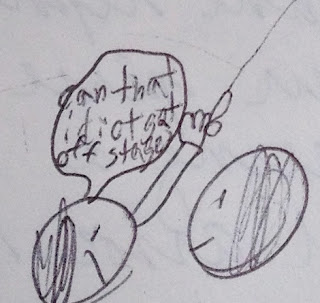 My heart sank. Here was proof that, despite how many opportunities and awards Sofia had received, despite how happy she was to be performing, she still heard a yucky voice. In fact, she heard it so clearly that she made it part of her picture.

In my first novel, NATURE GIRL, the main character has a continuing struggle with her yucky voice. As Megan hikes the Appalachian Trail, her confidence grows. The voice gradually fades, until Megan realizes with delight that the voice is gone.

I have to confess that that isn't really accurate. Those who have yucky voices, and I am one of them, know that permanently silencing that voice is very very difficult. The past few months, I've been struggling with an impossible novel. My yucky voice has been positively gleeful to have so many opportunities to make me feel bad. But I haven't let it completely take over my life.  I haven't quit. Instead I keep reminding myself of the positive comments I've received. It feels a little vain to reread kind emails and notes. That goes against my Midwestern upbringing. But why should we dwell on the negative? Why let that one voice be louder than the positive?

And so, in that spirit, I made a few alterations to my daughter's drawing. I decided to include what I know the rest of the audience was thinking. I hope she understands. 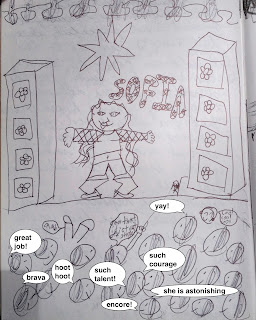 Posted by Jane Kelley at 3:53 PM No comments:

This month the middle grade authors at Smack Dab in the Middle are posting about moms and asking permission.

Stop by the Smack Dab in the Middle site to see my latest post.

Did I have the right to tell about this woman's years with the Seneca tribe?

Please make a comment while you're there -- I'd love to know what you think too!